The fulfillment of the promised King

Thinking his son would enjoy seeing the reenactment of a Civil War battle, a father took his son, Will, to the event. They were standing in the very front. But the poor child was terrified by the booming cannons. During a lull, Will’s dad finally got him calmed down. That’s when the Confederate general hollered, "Fire at Will!"

* There are many like this young man that just can’t get into Palm Sunday.

Title: “The fulfillment of the promised King.”

Theme: “2000 years ago, the Sadducees had a tradition in which they believed the Messiah would show up four days before Passover. They kept the gates of the Temple open so that He could walk right in to His rightful place. That is the very day Jesus chose to enter Jerusalem on a donkey fulfilling the prophecy of Zechariah 9:9.”

* It’s called Palm Sunday because people cut down palm branches and waved them before Jesus as He rode into Jerusalem.  I would like to share with you the following lessons.

Luke 19:28-35, “And when he had said these things, he went on ahead, going up to Jerusalem. 29 When he drew near to Bethphage and Bethany, at the mount that is called Olivet, he sent two of the disciples, 30 saying, “Go into the village in front of you, where on entering you will find a colt tied, on which no one has ever yet sat. Untie it and bring it here. 31 If anyone asks you, ‘Why are you untying it?’ you shall say this: ‘The Lord has need of it.’” 32 So those who were sent went away and found it just as he had told them. 33 And as they were untying the colt, its owners said to them, “Why are you untying the colt?” 34 And they said, “The Lord has need of it.” 35 And they brought it to Jesus, and throwing their cloaks on the colt, they set Jesus on it.”

* The fact that Jesus knew these details demonstrates his omniscience – his divine ability to know all things.

* That donkey happens to be a lot like us when we came to Jesus for salvation. We come, used to having our own way. We understand He is our God and creator but we have such a hard time yielding our life to Him. What an honor to be of used by the Creator of all things!

* The crowd recognized the importance of the event, but not its purpose. They cried out a Messianic Psalm – 118. “Hosanna” comes from Psalm 118:25.

* They thought He was coming as a king to free them from Rome, instead of a Savior to free them from sin. The same people who welcomed Him on Palm Sunday rejected Him just days later at the insistence of the Scribes and Pharisees.

Luke 19:36-40, “And as he rode along, they spread their cloaks on the road. 37 As he was drawing near—already on the way down the Mount of Olives—the whole multitude of his disciples began to rejoice and praise God with a loud voice for all the mighty works that they had seen, 38 saying, “Blessed is the King who comes in the name of the Lord! Peace in heaven and glory in the highest!” 39 And some of the Pharisees in the crowd said to him, “Teacher, rebuke your disciples.” 40 He answered, “I tell you, if these were silent, the very stones would cry out.”

* Was Palm Sunday an accident? Did Jesus wake up one day and say “let’s go to Jerusalem today, why not?” No, it was very very purposeful.

* Beloved, if we look at the Palm Sunday account recorded in Matthew 21, we will see that all the way back in chapter 16 Jesus was telling His disciples to expect it:

Matt 16:21-22, “From that time Jesus began to show his disciples that he must go to Jerusalem and suffer many things from the elders and chief priests and scribes, and be killed, and on the third day be raised.”

* Jesus had an appointment to keep. An appointment written in Israel’s Day Planner nearly 500 years before. It signaled Jesus as the Messiah.

Daniel 9:23-27, “At the beginning of your pleas for mercy a word went out, and I have come to tell it to you, for you are greatly loved. Therefore consider the word and understand the vision. 24 “Seventy weeks are decreed about your people and your holy city, to finish the transgression, to put an end to sin, and to atone for iniquity, to bring in everlasting righteousness, to seal both vision and prophet, and to anoint a most holy place. 25 Know therefore and understand that from the going out of the word to restore and build Jerusalem to the coming of an anointed one, a prince, there shall be seven weeks. Then for sixty-two weeks it shall be built again with squares and moat, but in a troubled time. 26 And after the sixty-two weeks, an anointed one shall be cut off and shall have nothing. And the people of the prince who is to come shall destroy the city and the sanctuary. Its end shall come with a flood, and to the end there shall be war. Desolations are decreed.”

* The seventy weeks are divided into three parts: Seven weeks – 49 years, until the city and its walls are rebuilt.  69 weeks (7 plus 62), 483 years from the decree, until Messiah the Prince appears. A final 70th week to complete the prophecy.

* Understanding prophecy can be difficult and some of this is confusing but we can piece together some facts. Fact #1. Jerusalem was destroyed in 72 AD. Fact #2. The Messiah will come before that time and will be killed or cut off.

* If you do your math you will find one week remaining – one 7year period of time until the rest of Daniel 9 is fulfilled. We believe this to be the Tribulation that will last 7 years.

Luke 19:41-44, “And when he drew near and saw the city, he wept over it, 42 saying, “Would that you, even you, had known on this day the things that make for peace! But now they are hidden from your eyes. 43 For the days will come upon you, when your enemies will set up a barricade around you and surround you and hem you in on every side 44 and tear you down to the ground, you and your children within you. And they will not leave one stone upon another in you, because you did not know the time of your visitation.”

* Soon the King of Judah will come on a war-horse. No more, gentle Jesus for the time for justice has come. What kind of God would He be if He never called man to account, if He never executed justice on the wicked?

Zech 14:2-4, “I will gather all the nations to Jerusalem to fight against it; the city will be captured, the houses ransacked, and the women raped. Half of the city will go into exile, but the rest of the people will not be taken from the city.3 Then the LORD will go out and fight against those nations, as he fights in the day of battle.4 On that day his feet will stand on the Mount of Olives, east of Jerusalem, and the Mount of Olives will be split in two from east to west, forming a great valley, with half of the mountain moving north and half moving south.”

* That is the 2nd Triumphal Entry! At that time Jerusalem will fall and half the people will be removed. But then the LORD Himself will fight against those nations that have taken Jerusalem.

* For more detail turn to Rev 19:11-16, “I saw heaven standing open and there before me was a white horse, whose rider is called Faithful and True. With justice he judges and makes war. 12 His eyes are like blazing fire, and on his head are many crowns. He has a name written on him that no one knows but he himself. 13 He is dressed in a robe dipped in blood, and his name is the Word of God. 14 The armies of heaven were following him, riding on white horses and dressed in fine linen, white and clean. 15 Out of his mouth comes a sharp sword with which to strike down the nations. "He will rule them with an iron scepter." He treads the winepress of the fury of the wrath of God Almighty. 16 On his robe and on his thigh he has this name written: KING OF KINGS AND LORD OF LORDS.”

* God knows what we need! “Excuse me,” said the young man, standing awkwardly at the open church door. “I’m here to pick up an Easter basket for my daughter. Am I in the right place?” “Well, we have baskets, but they’re not Easter baskets for kids; they’re food baskets,” I explained. That morning I had arrived early at Church to help distribute the baskets to needy families for Easter. To make sure everyone was taken care of, we had handed out numbers to the recipients that matched the basket they were supposed to receive. Each one contained a full Easter dinner—a whole ham, potatoes, bread, vegetables and a pie—plus enough staples to help feed a family for a week. “I’m grateful for the food, but when I heard you were giving away baskets for Easter, well, I thought they would be Easter baskets for children,” he continued. “I promised my daughter one.” He glanced over his shoulder again. “I left her in the car because I wanted to surprise her.” I felt bad, but there was nothing we could do. Our volunteers had put together food baskets, not Easter ones. The man handed me his number, and I walked over to where the baskets were waiting for pick up. A bulge in one of the baskets caught my eye. What is that? I wondered. Leaning in and looking more closely, I could see, unmistakably, an Easter basket—filled with an assortment of candy and Easter eggs—wrapped with ribbons and tucked inside with the food.  One of the volunteers must have added it by mistake! I thought. Then I looked at the man’s number in my hand. Well, I’ll be…“Happy Easter,” I said to the man, handing him the only food basket with an Easter basket inside. The very same basket with his number on it. “Someone knew just what you needed.” Someone sure did.
* God knows we need to have our sin forgiven. 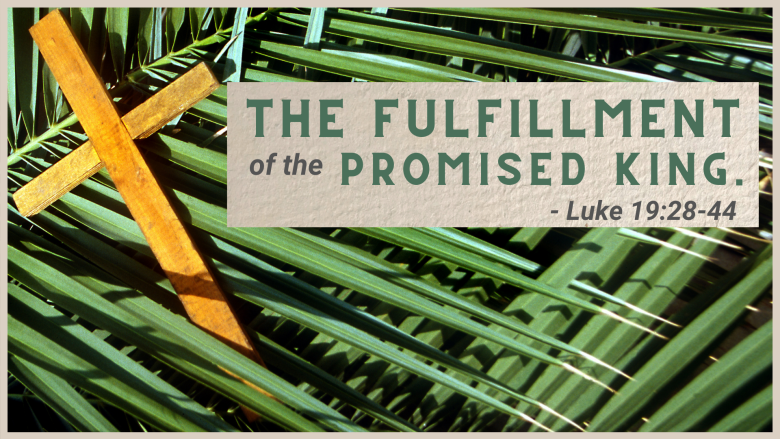